Based on the craft of choreography, we can offer the following services. In which industry (whether for music industry, business enterprise, film industry, …) we become active with what is your own individual need. All our work is tailor made! Do not hesitate to contact us.

Our kinetic show designs are effect-focused spatial choreographies that unfold through the use of objects, actors, the audience itself, or a combination of them. They create mobile stage sets that are versatile both in space and in itself. Those are used as an active narrative element, like a performer, dramaturgically supporting the overall happening. We create scalable ideas for center stage, front stage, site-specific or staged concepts.

In object choreography, we prefer to work with three-dimensional bodies. All objects together form a powerful structure, which transforms into a new structure over and over again during the course of the show. These constantly living structures work their way through the height levels, as well as into the height of the arena. They expand, contract, and thus constantly change the spatial effect.

Choreographed mass movements of actors or audience result in whole two- or three-dimensional images in the set, the arena or on the open space, which can be transformed again and again purposefully.

Nothing is left to chance.

The controlled change of the spatial effect serves as steering tool. We use it dramaturgically precisely and purposefully for the desired effect on the viewer or participant. This allows a subconscious steering of the associations and consequently emotions of the viewer.

Right from the beginning, already in concept phase, every design is focused on the desired emotional effect, atmosphere, energy (spirit) and associations. Our designs are individualised or personalised to the respective task, goals and nature of the event, artist or company.

A design that takes along.

The Nicole Wiese Company is an expert in changing the effects of space with all its relevant factors and thus understands how to steer the emotional impact of the event in a controlled manner.

This may relate to a range of body language information, such as:

Basic   –   Which movement or body language of the cast is necessary to make a special emotion visible?
Etiquette   –   What does the gait reveal about the education of a woman of the 18th century? How long did a decent curtsey last?
Proxemic   –   Raumsprache – Spatial speech – What does the distance between people mean, or their body orientation?Gestic speech   –   What does the gesture tell me about communication, trustworthiness, character strength of a figure?
Semiotics   –   Theories of social codes
Abnormal physical movement patterns   –   due to medical / biological circumstances such as pregnancy, mental disability, depression, autism, etc.
Changes in age   –   How will this figure move at the age of 80?
Biographical filming   –   exact motion analysis of the entire movement matrix of a real personality and translation to the protagonist, even if there is no picture material for a key scene – Had this person actually made this movement or not? How would she have moved in the situation – not only in her own body but also in space?

Based on task-specific training methods, we support and advise the actor / group to learn and use skills to make this physical figure language authentic within the own body language.

The craft, expertise and analytical methods are the same as those of movement direction, but the realising process is applied in reverse. While movement direction is about putting the figure’s physical language defined by the script and director’s intension on an actor (so, from outside to inside), performance coaching works the other way round: we shift the character of the singer / musician to the outside and arrange posture, gesture, facial expressions on the basis of the natural body language in a way, that the desired effect is achieved (so, from inside to outside). Depending on the artist, individual working process is done accordingly.

Often, what the singer means to express with his performance is something completely different or translocated in terms of importance than what actually comes to the viewer.

Always under the condition of authenticity, the natural body language of the singer / musician defines a range of movement within which he should act. Therefore, according to statements of our so far coached artists, the developed performance version feels new but “for me / that am I / not set”. If the artist moves outside his range, his performance becomes considerably weaker, ineffective and does not achieve the desired effect at the viewer.

In keeping with our high standards, our task is to give the singer / musician a vigilance and an awareness of what ‘performance means to me’ – ‘what shall my performance convey related to this track?’ ‘How far has my body language influenced?’ ; ‘Once those aspects clearly captured, what do I have to do or leave in order to get exactly this feeling / statement to the viewer?’.
On the one hand, it is about the artist, the track, the performance, the light, the set, the direction, the positioning of the artist on behalf of the management / label, but also the emotional transmission to the audience.

In our opinion, the intension and energy of the artist can only be transferred to the viewer by honest, intense energy output and touches him with it.

Basically, we do nothing else but to methodically abate the huge monster insecurity the singer / musician.

Our different formats are aimed at different focal points and are developed for startups, SMEs and groups with a staff of 50 – 600 people. Due to the targeted symbolic language (semiotics) in our formats, messages from the vision, mission and values of a company can be communicated impressively and emotionally sustainably among the employees.

Globalisation, demographic change, digital revolution, generation Y require existing companies and organisations to change their culture from the old world to the new one. Future-oriented corporations are confronted with the complex challenge of flat hierarchies, dissolved departmental boundaries, promotion of networking and swarm intelligence of their employees.

Flexibility, agility, dynamism become the motto. Companies need motivated and competent employees who not only want to pursue the goal of their own department, but also want to be involved in the good of the entire company.

It is necessary to break existing leading patterns of interaction and interaction. 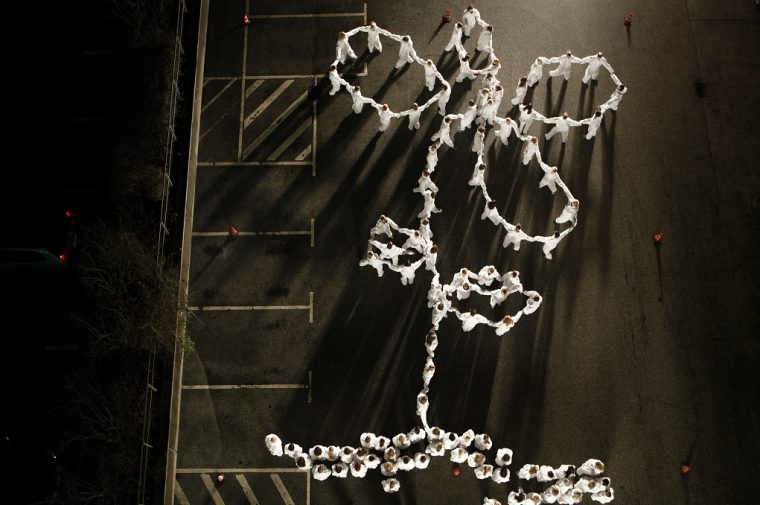 – the occasion of a merger of departments or entire companies whose different teams and values meet and, on the basis of mutual appreciation, should complement each other rather than adapt
– communicating new models in the behavioral principle
– strengthening new project teams, which change relatively frequently in their compositions
– clear definition and positioning of a new task area
– recognition for a good team to the company anniversary

Next to their differentness and possibility of an individual adaptation to your company, the strengths of our formats especially lie in the profound sense of togetherness as well as in the sustainable employee motivation and company identification. These are manifested above all by our deliberately initiated and accompanied process, and the following participants’ surprised cognition about what has just happened.

In each of our formats, modern knowledge from neurophysiological brain research, knowledge of spatial behavior and kinetics from the LMA (Laban Movement Analysis), as well as steerable sequences of group dynamics processes are included.

Here is an example, (in German) of how one of our formats could look like, in the case of an IT company after a two-year restructuring process in which the teams were constantly changing.